skip to main | skip to sidebar

You Have to Die to Be Reborn

I'm excited to share my new project with you. It is called The Electric Mainline, because today information is a form of addiction. The purpose of EM is not detox or rehab from this addiction, but learning how to address and live with it. EM is a kind of news filter. presents information you can get anywhere on the web - the latest news stories, those stimulating bursts of data. Information on the web is largely presented pre-understood, pre-digested and the reader must do very little except lie back and receive it. On EM this information is presented according to an artistic impulse, one driven towards uncovering the strange, surreal, sci-fi undercurrents in the events of the day.
In other words, imagine if you read Google news, but it was edited by David Cronenberg.
EM is always on."
Posted by William at 12:02 AM 0 comments

ONCE MORE, FRIENDS, INTO THE BREACH

Labels: This Is Not An Exit

Acknowledged Classic will remain available online for archival and research purposes. Access will be free.

The Beard That Fell to Earth 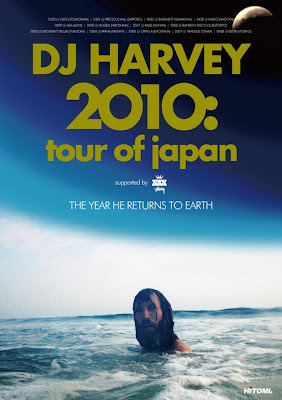 Or, Notes Towards a Psychedelic Biology

Let me be perfectly clear: I hate this song. I'm not saying it's not good. I'm saying I feel plagued and violated when I listen to it. But it is a perfect introduction to today's topic: the weirdness of the animal world. Jonsi, lead singer of Sigur Ros, sings here about wanting to be transformed into a kind of beast-boy, describing, as pitchfork notes, his new animal life with a Disneyian saccharinity.

Talking about becoming an animal is one example of a grand thematics of escapism that's been operating in popular music for the last decade or so, and you can count Animal Collective as properly the most original proprietors of this trend. Besides becoming-animal, other recent trends of this escapism in music include: primitivism, rural-backwoods qualities, folk revivals, psychedelia, cosmic themes, 80s nostalgia, the fairy-tale fantastical (skulls, dreamcatchers, magic spells, wizards).

Now, one reason why something becomes suddenly popular as an aesthetic object is that it's become so strange, forgotten and alienated for a particular culture that it becomes ripe again as a foreign territory. This is, I argue, what's happened to animal life and nature in general. In the twenty-first century, our own earth has become a strange planet, a psychedelic landscape. Once it's become strange, it's ripe again for cultural exploration. Science has never stopped exploring the planet, but now we're at a moment when biology and other earth-sciences are ready to interbreed with art and culture in new ways.

Let's see how the current historical moment is marked by this new intersection. It's not only musical, it's there in fashion, TV and cinema as well.

One of many testaments to McQueen's brilliance, the collection, entitled Plato's Atlantis, envisioned a Waterworld-like scenario in which the earth has become flooded by global warming, and humans have subsequently evolved into new life forms. McQueen interiorizes and transforms the psychedelic patterns of insect and animal bodies into something radically new.

On television, anyone with cable or a bittorrrent client will tell you that the most psychedelic thing going right now is the BBC documentary series Life. A follow-up to the groundbreaking series Planet Earth, Life shows the animal and plant worlds in jaw-dropping digital precision, unveiling wholly unseen realms of color and movement. 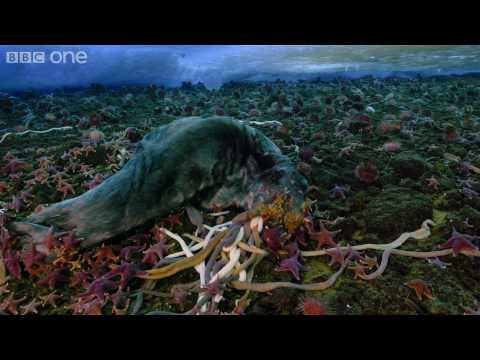 in this typically mindblowing sequence from Life where, sped up via timelapse, monster worms and sea stars devour a seal.

In film, the occult significance of James Cameron's Avatar is that Pandora is already planet Earth - you can almost imagine Sam Worthington's character discovering the Statue of Liberty on the beach and yelling "you damn dirty apes!". 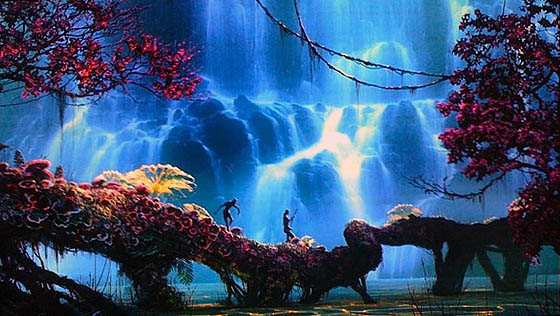 Avatar is Earth psychedelicized. Look, for example, at folk paintings that depict experiences of the Amazon jungle while on the shaman drug ayahuasca: they look remarkably like the world of Pandora, right down to the blue and purple hues.

If in 2010 the traditional idea of science-fiction is almost superfluous, it's not only because we've got so much technology that we're already living in the future, it's that a contemporary vision of earth, not space, as the final frontier contributes to an understanding that life on earth is already a science-fiction story. The possibility of life developing on earth and the fact that humans explore this earth cataloging the strange abundant wealth of its life: it's already a hypothetical scenario, a fiction about cosmic mystery and the adventures of scientific practice. 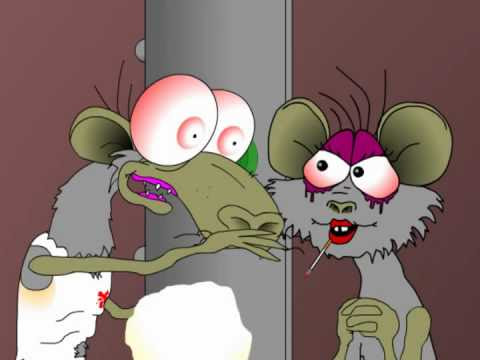 With uncanny timing, the latest episode of South Park comes on the heels of a recently-published scientific report comparing the addictive quality of junk food to that of cocaine.

Published in Nature Neuroscience, the study, in which different groups of lab rats were tested for their responses to healthy and junk food diets, supports the idea that "compulsive-like eating behavior can emerge in extended-access rats in a manner analogous to the compulsive cocaine-taking seen in rats with a history of extended access to the drug." Seems the group of rats given only junk food became addicted enough that the rats would ignore deterrents like electric shocks in order to get their fix. The scientists build an analogy: today's junk food is to food a hundred years ago what cocaine is to the cacao leaf: processed, extracted, intensified to produce that mainline rush.

In the episode "Medicinal Fried Chicken," Cartman plays exactly this sort of rat. When he finds out that KFC has been made illegal in Colorado, he spirals into an abyssal panic and will stop at nothing to get his fix. In his autobiographical novel "Junky," William Burroughs says that "you don't know what junk is, until you've been junk sick." When Cartman descends into his own junk-food sickness, he winds up working for a Scarface-like underground KFC drug ring, hustling dealers, usurping his boss, and powwowing with a Pablo Escobar-tinged Colonel Sanders. Meanwhile Kyle's dad is possessed enough at the thought of legal weed that he gives himself ball cancer in order to procure a doctor's note. The doctor, perplexed by the subsequent rise in ball cancer among the father's friends, now thinks that, with junk food gone, he realizes what junk is: junk food was in fact keeping South Park ball cancer-free. In a characteristically dialectical twist, KFC is reinstated as MFC, medicinal fried chicken - the relation between food and substance undergoes a double inversion indexed by the very double-meaning of "junk." Food and drug are interrelated - no wonder we have a government entity called the Food and Drug Administration.

Tell me this isn't an ad for ketamine.

This starts with a dog but ends up with cats in a psychedelic cosmos.

I love the feline face-melt here, when the cats get too high and start chasing imaginary mice. 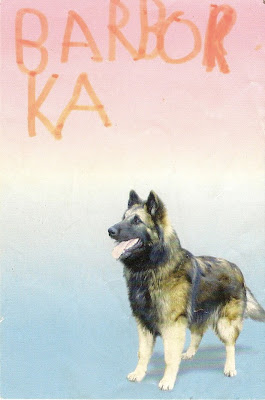 I got a new dresser so it gave me a chance to review my back files and rediscover some personally acknowledged classics, such as Barborka. Real OG friends of mine will of course recall Barborka and the effect that its sublime ridiculousness had on me. I found it in a hole in some alley in Prague. Only much later did I learn that Barborka is a Czech girl's name, similar to Barbara, and that the 'k' at the end is a dimunitive. I had been pronouncing it Bar-BOR-ka because it sounded stupider that way, and this stupid sound and its earnest, clumsy letters seemed so nicely to compliment the loyal, mindless animal below it, the one eternally frozen in chipper ready position. Still makes me laugh.
Posted by William at 11:31 PM 3 comments

Labels: inserting an ice cream sandwich into a cheeseburger 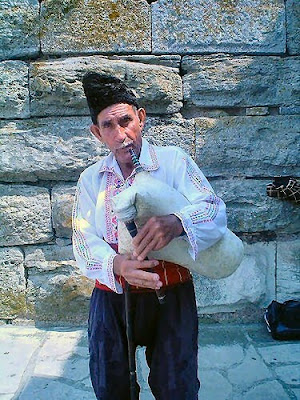 With the prospect of a Bulgarian hiking trip on my summer agenda I started doing some research on the local musics - in the course of which I discovered the gaida, a goatskin bagpipe indigenous to the Rhodope mountains of Southern Bulgaria. The Rhodope mountains are known for their flourishing music traditions, and due to their proximity to Greece bear part of that country's mythic legacy - the Rhodope's "Devil's Throat Cave" being supposedly the place where Orpheus descended to hell to retrieve his bride.

The gaida is played in a rather droney and intense way, sounding very little like its much kitschier Scottish cousin, and more like a certain Moroccan-Jajoukan pan flute. It's a haunting, spiritual sound that gains in intensity when it's like, played by a hundred dudes at once!
the last clip is my favorite, for obvious reasons. it's linked here as it is not embedding properly for some reason.

Glass Candy - 'Feeling Without Touching' from Travis Peterson on Vimeo.

The first official video for Glass Candy now that they've settled into their synth-pop phase after long abandoning their no-wave death-punk incarnation. This video is aight, it looks like an American Apparel ad I guess. The song, however, is magic.